Correction: I was mistaken that The George was PUD development (due to some missed context I had in conversations with some neighbors). It is in fact a by-right zoning and this application is a site plan change which, in some cirumstances, requires Planning Commission approval. Given that residential use is an approved use in the zone and the site plan is otherwise in compliance with our zoning regulations, I don't think there is much a justifiable legal argument to deny what is a permitted use.

If you're an Ann Arbor resident who pays any attention to the built environment, you have probably found yourself scratching your head about why retail spaces in new developments sit empty for so long after construction is completed. It often takes years for these spaces to be filled. Many are still sitting with vacant, including The Yard on South Main and, relevant to upcoming Planning Commission business, The George on Packard.

The Rent is Too Damn High #

The proximate reason these spaces is the land owners are asking for high rents that most potential tenants are unwilling to pay. A reasonable person might ask, wouldn't it be better to take a lower rent and get some money rather than no money? For a a few (sometimes bizarre and frustrating reasons) it is often in the landlord's interest to wait it out and leave a space vacant.

The more straightforward explanation is that commercial leases are long (often 10 years) and more involved than residential rentals (spaces often need to be renovated at significant expense to suit a specific tenant) so landlords are much more careful about selecting their retail tenants. Rents are also "sticky," so signing a "low" rent lease for short term gain may translate into long term losses. An oversimplified example: if a landlord believes that they could likely find a tenant willing to sign a 10 year lease for $2 if they wait long enough, and the most tentants they can find easily won't pay more than $1, it can make sense for that landlord to wait as long as 10 years to land the former tenant.

This belief isn't entirely unjustified. Many new downtown buildings experienced this kind of long term vacancy, eventually landing a stable retail tenant at higher rents (e.g., it took years before the 7-11 rented a space at The Foundry on Huron).

But another, counter-intuitive, and frustrating reason is how commercial loans for mixed use developments are typically structured. The first half of this Strong Towns article "The Paradox of Persistent Vacancies and High Prices" does a good job explaining how this plays out. TL;DR: landlords accepting lower rents rather than leaving spaces vacant can lead to insolvency, due to the nature of how their loans are valued and structured. Strong Towns argues that this bizarre and counterintuitive outcome is a result of abstraction of commercial real estate lending based on models that ignore the value of local knowledge. But there is also a potentially rational basis for waiting what seems like a long time for an initial tenant-it is sometimes worth the gamble.

From residents' perspectives, this isn't ideal. Long term vacant retail spaces are unattractive and residents might benefit immediately from retail services from potential retail tenants that could sustain lower rents.

So What Can a City Do About Vacant Retail? #

Cities don't have levers to change the national real estate finance markets, models and structures. Local attempts to force retail rents lower to limit vacancies (like a vacancy tax or rent control) if effective, would likely lead to a cycle of bankruptcies (for above reasons), and ultimately slow or stop new development of any new retail space until rents for existing space increase substantially across the board.

Some cities have been so desperate for certian kinds of retail, they effectively subsidize stores, like this town-owned grocery in Baldwin, FL; or Grand Rapids DDA's efforts a decade ago to subdize rents in long-vacant downtown retail spaces. But this kind of subsidy is expensive, limited in its potential effect,and can have negative impacts outside of the targeted area. E.g., if a subsidized store draws enough business away from an unsubsidized shop in a nearby area, causing it to close, we end up moving the problem around rather than actually solving anything.

Given all this, it should be clear why attempts by cities to mandate retail uses in new developments doesn't often work very well. In order to get a development approved in a discretionary process (which is often the case for mixed-use projects), developers will often agree to add retail space even if they think it will be difficult to fill under the terms banks and investors will finance. Faced with either not building anything or making a tenuous promise to a City Council on one side and a bank on the other, the developer will make often make the deal, but its not surprising these spaces sit vacant for years. We essentially asked for it.

Exacerbating this dynamic for retail space specifically in the US is we have far, far more retail square footage per capita than any other country on the planet. More than anywhere else, we subsidize a built environment that requires people to own cars to fully participate in society, which has the side effect of making large box stores with large parking lots profitable for serving a relatively large area. The fact of nearly universal car access and existence of this form of retail eat away at any potential ability for smaller, finer grained mixed use walkable retail spaces to thrive. 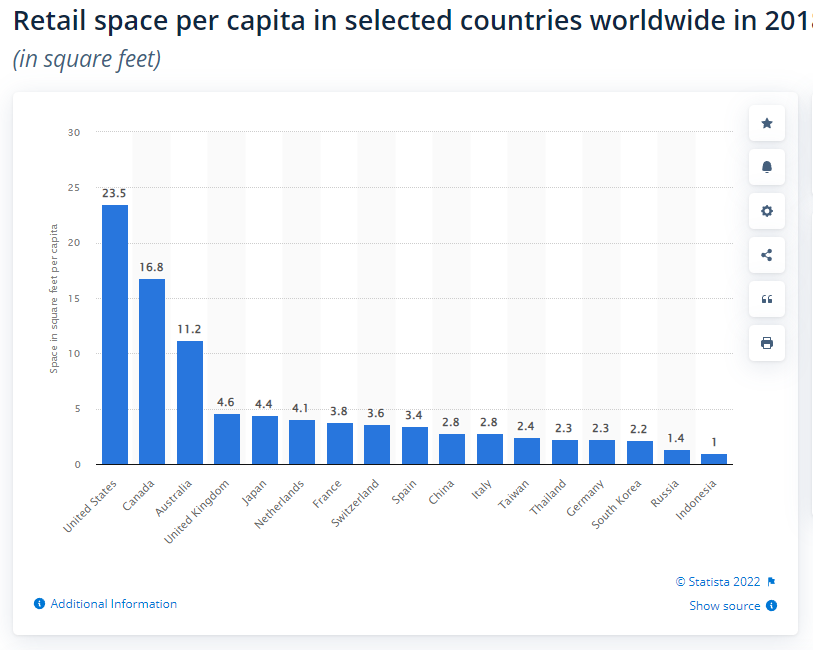 So What About The George? #

So why am I writing about this? Ann Arbor's City Planing Commission has an upcoming agenda item for a "PUD amendment" for The George on Packard. The background here is when this development was originally proposed as Packard Square, the City forced the developer through a what is called a "PUD" zoning process rather than rezone the property for the level of density the developer wanted to build (more on PUDs below). As part of this process, the original developer committed to include a certain amount of retail space. The project has a complicated history, including the bankruptcy of the original developer before the project construction was completed. The new owners are asking for an amendement to their PUD zoning to convert the unrented retail spaces to residential spaces (something that would not be required with a normal mixed use zoning category).

The retail spaces remain unrented, predictably, because the landlord is asking rents higher than any potential tenants have (so far) been willing to pay. And, in my opinion, the entire site design is a bad one and the retail spaces are poorly suited for any tenant, but especially the kind of tenant that would pay high rents.

We are not privy to the landlords finances, but considering the financial precarity of this project over its lifetime, it is very likely that the landowner is between the rock of its retail commitment to the City and the hard place of its bank financing. Which is why they are seeking "Option 2" from the Strong Towns article referred to above: change the use to one that can sustain the rents they need to meet their loan obligations.

What Happens if the City Forces The George to Keep Its Retail Space? #

Given the history of this project and how US development financing works, 1 & 2 are far more likely than the outcome people actually want, which is 3.

"But I Want a Walkable City With Convenient Retail Everywhere!" #

Me too! But simply mandating retail uses detached from any of the practical realities of making those uses actually work and function is evidently not a means to achieve that end. If we want more walkable, local, fine-grained retail, we need the foot (and cycle) traffic to sustain those local businesses, which means higher housing densities where we already have housing. This is especially necessary to make up for the drain auto-centric retail on the fringes inevitably draws from these smaller businesses. We could also allow small scale retail in more places, including the majority of the land in our City which is zoned exclusively for residential use; and allow small parcel, no- and low-parking retail uses. Many of the places we used to have smaller, neighborhood scale retail, those same uses are now banned outright. We don't need big developers in major redevelopments to open small shops when local money and small developers can redevelop smaller parcels more finely integrated into neighborhoods. Trying to force large developers to do this is a crude and ineffective tool.

Side Note On PUDs, Adaptability and Resilience #

All of this helps illustrate why I don't like "PUD" zoning for what are straightforward projects. PUD stands for "Planned Unit Development." It is a special zoning category that allows a developer and the City to negotiate the specifics of a development on one site without the more general constraints of a typical zoning category. They can be useful for truly unusual or special sites, or for atypical mixes of uses, but for straightforward mixed use "apartments and shops" kinds of developments, they are a poor tool for the job and, as this case clearly illustrates, do not lead to better outcomes.

Another reason I do not like PUDs is they are almost always extremely rigid. Most zoning categories provide a list of constraints (e.g., what spaces can be used for and how big buildings can be, in general), and land owners can change the mix of uses or the shapes of their buildings based on their needs over time without requiring City Council approval for anything that meets the general requirements of the code. PUDs specify exactly what the buildings should look like and how they will be used and require expensive and time consuming, discretionary process for any change. Thriving cities change over time, and modest changes like converting a retail space to residential use and back again provide a flexibility that allows cities to better adapt to the needs of their residents. Adding expensive and time consuming processes for modest changes over time is brittle and expensive, not adaptive and resilient.

The original developer of Packard Square was not competent, they pursued a poor quality design, and the current owners and the rest of us are left with trying to make the best of a non-ideal situation. Despite having the most discretionary, wide-open possible process to negotiate the shape of this development via zoning (a PUD), we still ended up with this outcome. The PUD zoning process didn't make it better. What it did do is signal to any other potential developers that Ann Arbor continues to be a place with high and often pointless process costs that increase the risks (and costs) of building anything at all, and we make it difficult to adapt when conditions change. It should not be a surprise only a small number of large, well-heeled and boring developers (and their usually boring-to-bad new developments) are the ones who show up to do business here at all. If we want to see more interesting, more ambitious and more diverse (in scale and kind) of new redevelopment, we need to rethink the processes we currently have in place. It also means we have to be a little comfortable allowing developers to take some risks and change course when their plans don't pan out within general guidelines. More process, leading by committee from behind using blunt and ineffective policy tools will not get us there.